Most gem scholars agree that the tradition of birthstones arose from the Breastplate of Aaron: a ceremonial religious garment set with twelve gemstones that represented the twelve tribes of Israel and also corresponded with the twelve signs of the zodiac and the twelve months of the year.

Because ancient people did not always classify gemstones by mineral species like we do, there is some debate about which gemstones were set in the breastplate and why. Because of this, different cultures around the world have developed different birth stone lists. The modern day list that you know is only the most recent list: some older lists still exist. Some also argue that the proper way to assign gemstones is according to astrological sign and not month. We think it is more fun to choose the gemstone that speaks to you from all the possibilities.

Text from the International Gemstone Association at: http://www.gemstone.org/gem-o-rama/gem-o-rama_birth.html 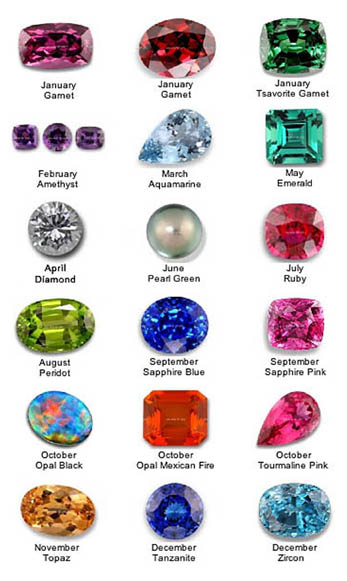 These birthstone images cannot be reproduced or
used for resale or profit in any way.